Blackdown Yurts is lucky to be situated close to the stunning East Devon coastline. Read on for information and top tips about the 5 best beaches on the East Devon coast and two bonus beaches just over the border into Dorset.
​
We don’t really have a favourite among these beaches, they are all gorgeous in their own way, so we weren't sure what order to put them in. In the end we decided to work forwards in geological time along the world famous Jurassic Coast from Exmouth in the West (where rocks are 250 million years old) to Charmouth in the East (where they are a mere 200 million years old!).

​A map (below) in the leaflet about the Jurassic Coast World Heritage site (available online here) tells you how the age and type of the rocks changes along the coast (along with a lot of other useful information). The section between Exmouth and Lyme is actually Triassic in age rather than Jurassic and the alternating hard and soft rock strata are what cause the cliffs to soar into the sky at some points and plummet to sea level in others where rivers have broken through softer rocks to greet the sea. It is here that settlements often sprang up close to fresh water and safe harbour and where we can now easily access the beach, parking and facilities. 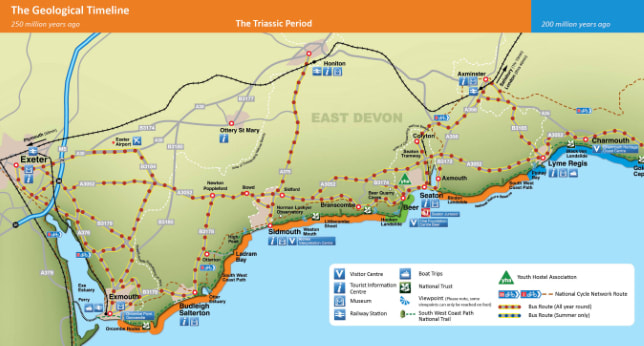 Exmouth and neighbouring Sandy Bay are this stretch of coastline’s only proper sandy beach offerings (see below for entries on Sidmouth and Lyme too). With broad stretches of sand and shallow water on the estuary of the River Exe, Exmouth is a mecca for water sports enthusiasts such as kite and wind surfers. Remember to pack your bucket and spade if you have little ones with you so they can dig to their heart’s content! Watch out for warnings about currents, inflatables are not allowed. When we visited lifeguards were very much present and looking out for everyone but do take care.
Things to do - World of Country Life at Sandy Bay is a fantastic day out for all ages. Pre-school children will love its play areas and petting the animals but it will also appeal to anyone with an interest in Devon’s history and/or a passion for vintage vehicles. Ferret racing is particularly enjoyable (video on our You Tube channel). Mia and Felix reviewed World of Country Life here.

The Queen's Drive Space is a new area behind Exmouth's seafront that has been remodelled for Summer 2018 with new play park and food and drink outlets. Exploring Exeter recently reviewed the new space in their blog. The playground is large, wood and sand dominate both there and in the well-designed seating area in the middle of all the food and drink stalls, meaning little ones can play safely while you sup your Oddfellows G&T or pint and enjoy your food.

A gorgeous beach in a charming little town named after large salt pans that were once located close to the sea and tended by monks from nearby Otterton as far back as Roman times. Budleigh provides a relaxing day out, colourful beach huts adorn the beach, but there is plenty of room for everyone. We really enjoyed swimming at Budleigh, it was easy to get in and surprisingly warm.
Things to do - Walk up the beautiful River Otter to Otterton Mill, a working flour mill with gallery and shop, award-winning cafe-restaurant and a programme of roots music. The route goes through fantastic wetland scenery, great for bird watching and is a relatively flat and easy walk. You may also spot evidence of beavers! You could make it a circular walk and return via along the coast via the Southwest Coast Path. Click here for a suggested walking route.

A fantastic option if you want a mix of beach and urban. There is a smattering of red sand at the Jacob’s Ladder end of the beach with great rock pooling but check the tide times. A little shop set into the rock beneath The Clock Tower (see below) at the bottom of Jacob's Ladder serves takeaway coffee and ice-cream. Walk around the red rock outcrop on the raised walkway to access the main promenade and Sidmouth proper.  Sidmouth has a charming little shopping area with some great boutiques and arty/crafty shops.
Things to do - Rent kayaks and stand up paddle boards from Jurassic Paddle Sports on the main stretch of beach.

Visit the lifeboat station towards the eastern end of the esplanade. The sweet little station is open from 10am to 5pm in the Summer (10am-4pm in the Winter except Christmas Day) so you can see the lifeboat and learn a bit about the history of this self-funded community lifeboat.

The Manor Pavilion Theatre in Sidmouth is famous for its summer season of repertory theatre. There is also a charming old-fashioned cinema in town.

Sidmouth Folk Festival and the Sidmouth Regatta are popular. The regatta is usually preceded by an air show.

A very picturesque and unspoilt village with a National Trust stretch of coastline. I found it quite bizzare to see cows grazing right next to the sea. The view of and from the cliffs is simply superb.
Things to do - Walk up to the top of the hill for fantastic views and a good bit of exercise! If you are feeling particularly adventurous you could walk more of the coast path to Beer for lunch and back again. It's a great stretch as you don't have to do the same path twice - you can walk there over the clifftops and back through the jungly under cliff path or partway on the beach. See this blog for more details.

Marvel at the gigantic anchor from the MSC Napoli which was stranded and lost her cargo at Branscombe back in 2007.

Runner-up in Channel 4's Best Village in Britain, Beer’s spectacular beach is enclosed on both sides by soaring cliffs. You approach down a steep street with a stream running down the side. Handy boardwalks mean that you can take buggies quite a way onto the beach without suffering the effects of the pebbles. If you wish you can hire deckchairs or beach huts from the two beachside cafes.
Things to do - Hire a boat to drive yourself or go out on one of the larger boats to catch mackerel. Deep sea fishing trips also available. If you don't fancy braving the waves yourself, buy your fresh fish for supper from the shop near the beach.

Visit the small but perfectly formed and fascinating visitor centre at the bottom of the slope towards the beach. Who knew that lacemakers from Beer made the lace for Queen Victoria’s wedding dress? Certainly not me. Nor that the traditional boats you can hire on the beach are called Beer luggers. It’s only small, but all ages will find something of interest.

Take a tour of Beer Quarry Caves to learn how stone was mined far underground for centuries and taken all the way to London to build such masterpieces as St Paul’s Cathedral and Westminster Abbey.

The Southwest Coast Path links all of the beaches featured. If you are holidaying with more than one car you could park one car at the end of a section, drive one to the start and and then collect the car from the start at the end. Alternatively you could make use of the bus service that links coastline towns and villages. Beer residents have begun to put together a selection of circular walks that begin and end in Beer to avoid the logistical difficulties that come with walking from A-B.

Just into Dorset is the coastal town of Lyme Regis and its smaller neighbour Charmouth. Both are famous as the site of numerous fossil discoveries including sea-dwelling ichthyosaurs, plesiosaurs and ammonites.
Things to do - ​Well it's really all about fossils in Lyme Regis and Charmouth. Look for fossil ammonites in the flat rocks on the beach beneath the Charmouth Road car park. There is great rock pooling for living fauna and flora to be had here too. You can also search for fossils in the soft rocks along the beach east from Charmouth.

As you might expect there are several museums in Lyme and Charmouth. There is the main Lyme Regis Museum where you can learn about Lyme's most famous fossil collector, Mary Anning. Lyme was the location for the 2020 film Ammonite with Kate Winslet playing Mary. Lyme often hosts fossil festivals and has a regatta and carnival week in August.

There is also the Dinosaurland Fossil Museum whose exterior is adorned with tree ferns. It reminds me of an old Victorian museum stuffed to the gunnels with fossils and it also has a room with stuffed animals.

Charmouth Heritage Coast Centre is located in an old cement works where they once nearly crunched up one of the most completely preserved fossil sea-dinosaurs ever found. Thank goodness they didn’t, it is now displayed on the wall. This is a great little museum with a fossil shop underneath. Lots of guidance is provided for would-be fossil hunters and they often run fossil hunting walks and events.

Do please let us know if you find any fantastic beaches, places to eat, and things to do during your stay as we might feature them on our website. Thanks, Katie and Mark. [email protected] 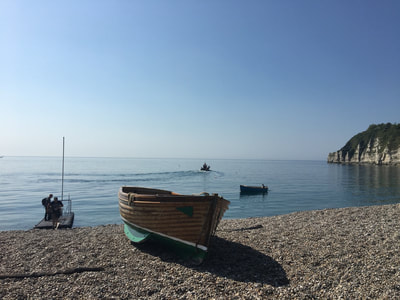 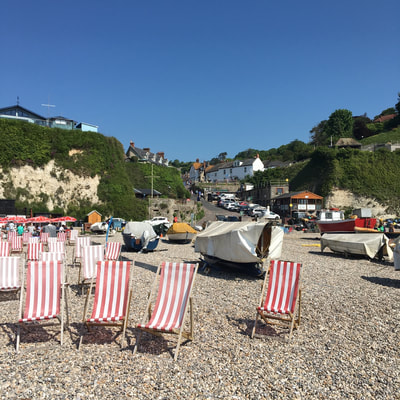 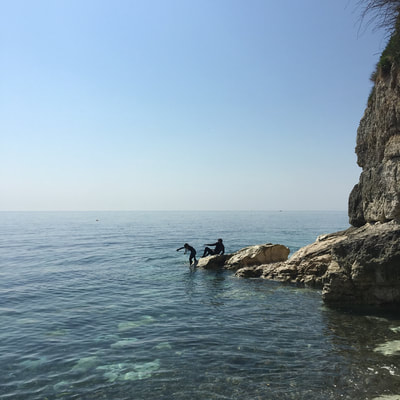 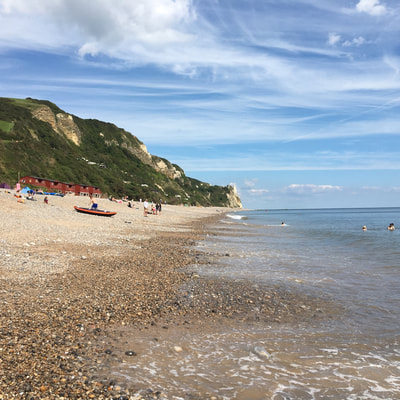 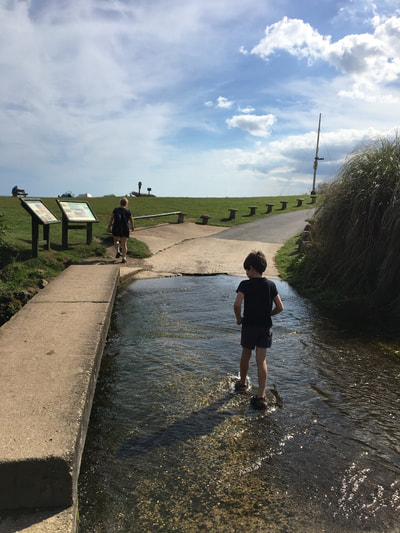 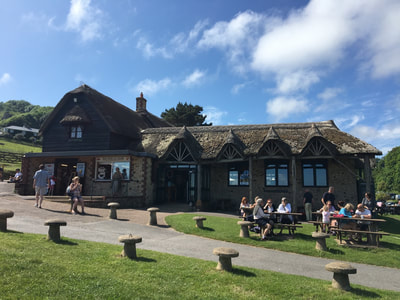 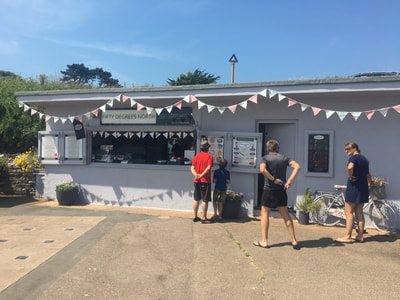 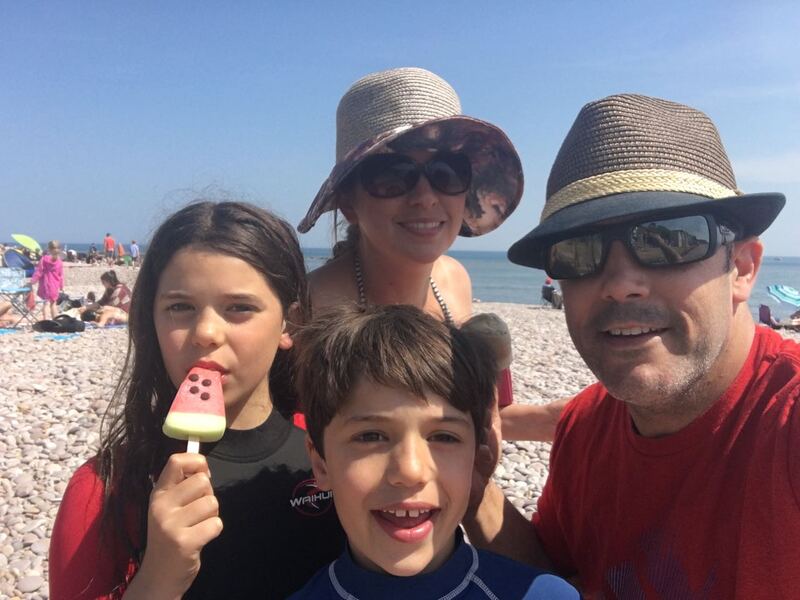 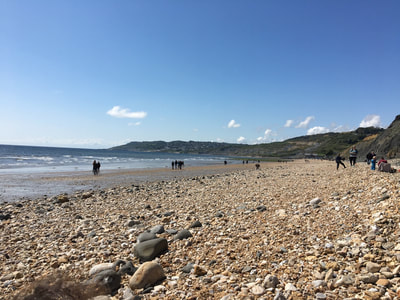 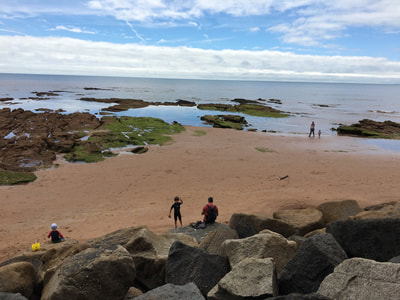 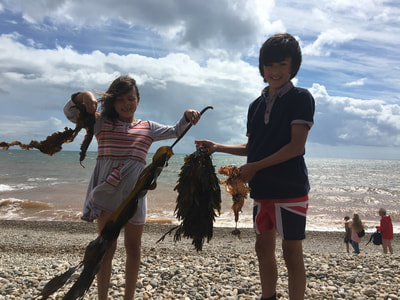 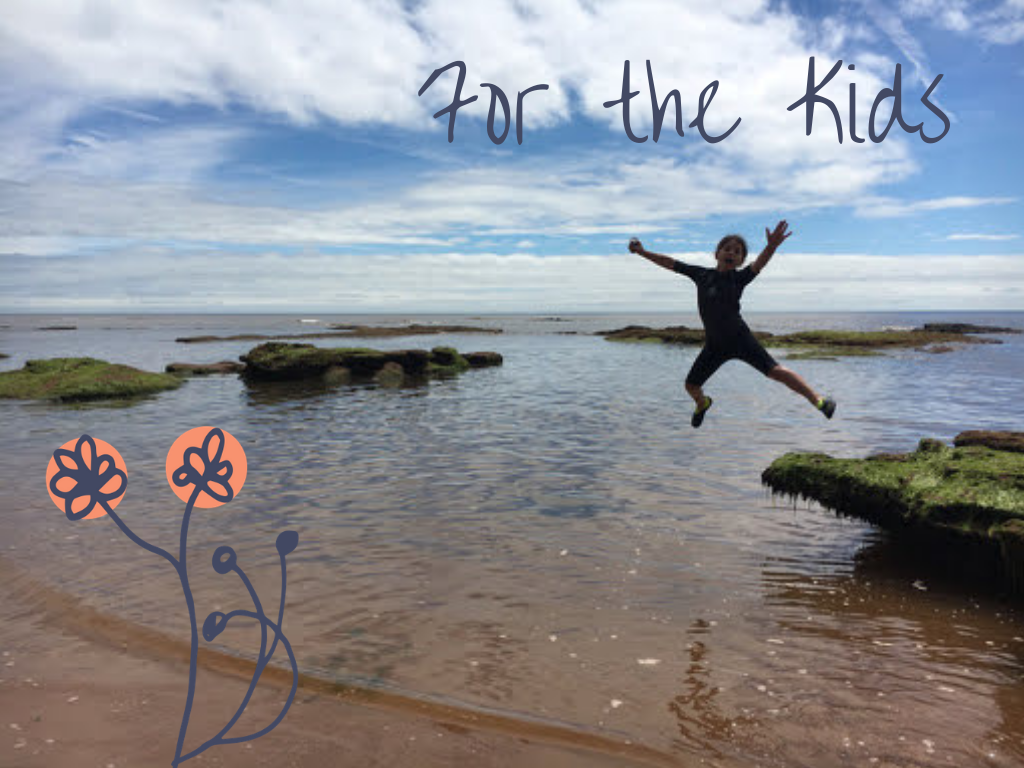 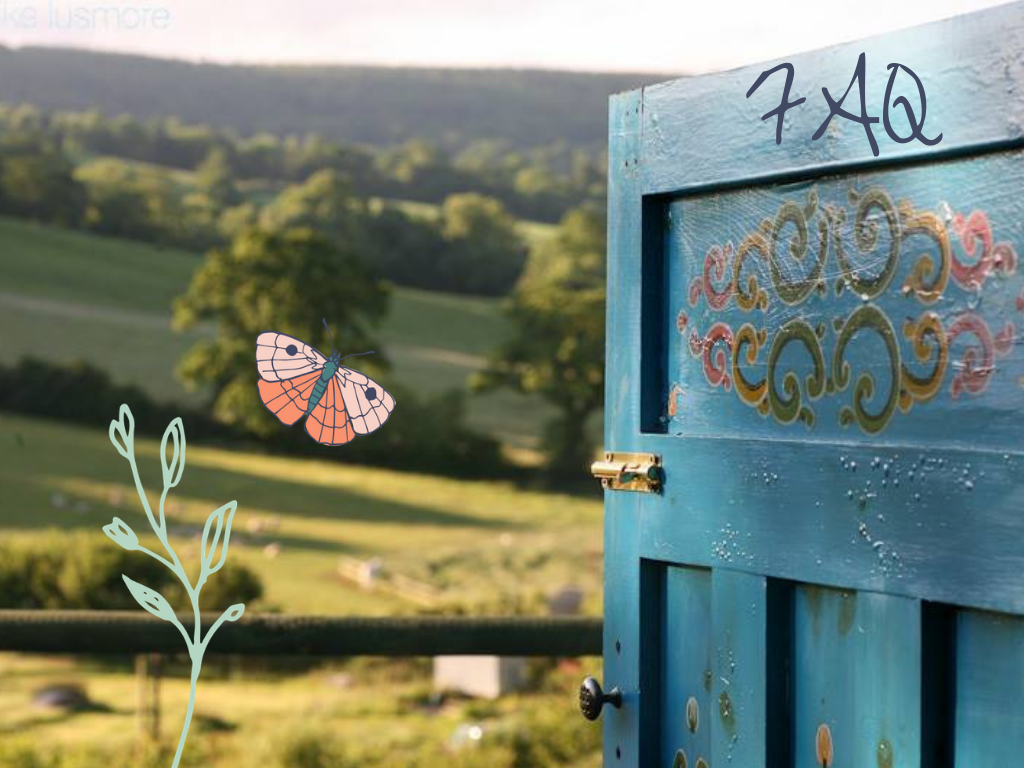 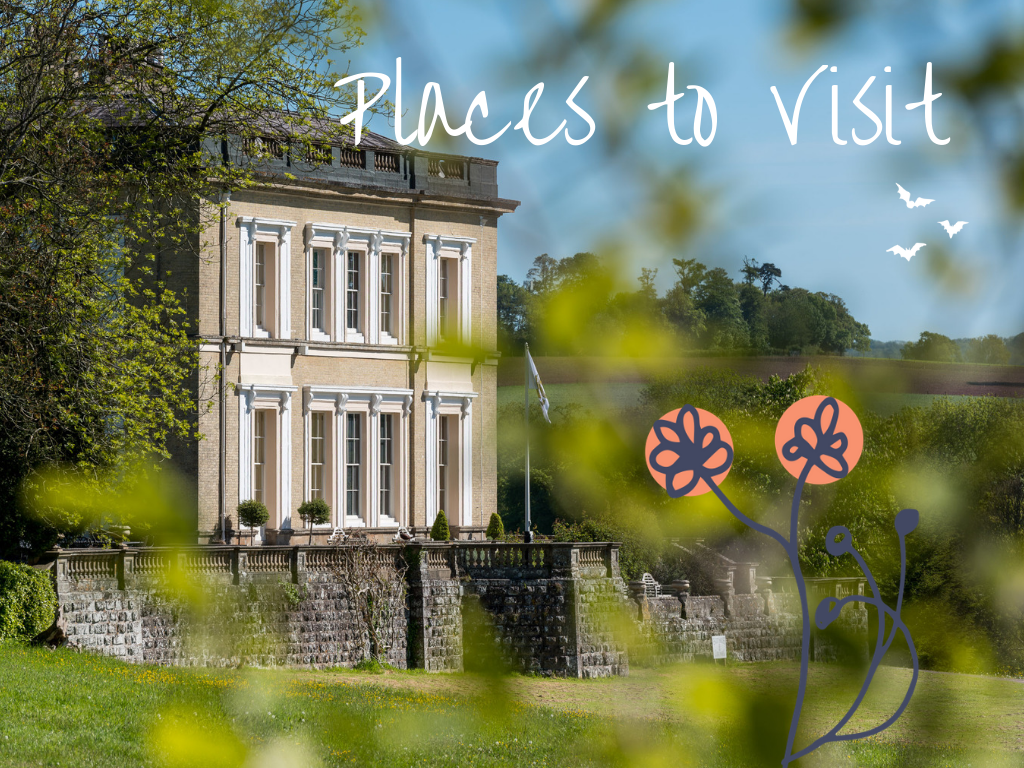